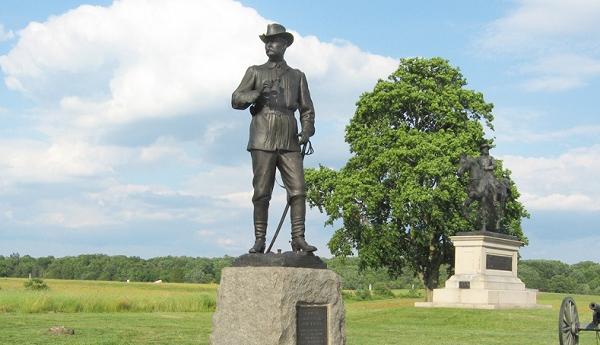 John Buford peered intensely into his binoculars. He was looking westward out toward the Blue Ridge Mountains in Pennsylvania looking for the slightest indication of the approach of the enemy. He knew that the earliest spotting of the enemy would increase his ability to withstand the attack of the formidable force that was coming his way.

The date was June 30th, 1863 . The place was on McPherson’s Ridge less the one mile west of the town of Gettysburg, Pennsylvania. John Buford, general of a Union cavalry division of 2, 700 men had just arrived in town during the late morning. His division of horsemen was the vanguard of the Union Army of the Potomac. Their task was to locate the Confederate army of Northern Virginia which was under the command of General Robert E. Lee. This large army of 75,000 men began moving northward from Fredericksburg, Virginia on June 3rd, , 1863, with the intention of moving north behind the cover of the Blue Ridge Mountains through Maryland into Pennsylvania. Their plan was to carry out a major invasion of Northern Territory with the one of the objectives being the capture of a major city like Harrisburg, Philadelphia, or Washington D.C. They for certain wanted to defeat and destroy the Union Army of the Potomac. The Confederate leadership believed that in accomplishing these objectives they would force President Lincoln to seek terms of peace and thus achieve their independence.

Buford knew through the reports of scouts and local civilians that the Confederate army was not too far away to the west, north, and northeast of the town of Gettysburg. He understood that if the Confederates took the town of Gettysburg and the hills that were located to the east and south of town that the enemy would have a great advantage in the crucial battle to come.

The Army of the Potomac had more soldiers, 95,000, and more weapons and ammunition than the Confederates had. Buford was confident they could win the battle. But the problem was that he needed to buy the army time to get to Gettysburg. They were still a day’s march away.

General Buford decided on a plan by which he would fight a delaying action. His plan involved sending his soldiers that night out to the ridges that roll like waves to the west of Gettysburg as far out as two miles. It was to the west that they enemy was the closest. The comparatively small number of Buford’s soldiers would try to hold off the approach of the enemy, who had more numbers of soldiers nearby, by firing from one ridge at the approaching enemy to slow their approach then retreating to the next ridge and repeating the same tactic. Hopefully by the time they got to the last ridge before the town of Gettysburg major portions of the rest of the Union army would have arrived.

One of the keys to success was getting the earliest possible sighting of the enemy’s approach toward the town in the morning. One of Buford’s commands for his soldiers before they went out to occupy the ridges was, “Watch for dust clouds in the morning !” By spotting dust clouds they could know that the enemy was approaching before they visually saw them. The men marching toward town on the dirt roads would form these dust clouds.

Buford’s men heeded his advice and were aware at the earliest possible moment of the approach of the enemy that July 1st morning. Buford’s men were able to delay the enemy long enough for the closet divisions of the Union army to arrive. The Confederate Army was able to capture the town later that day but not the high ground, the hills east and south of town, which were secured by the Union Army that July 1st night into July 2nd . The Union would win the battle on July 3rd , in large part because they were able to control the high ground throughout the battle. Fighting from the High Ground is a great advantage in a physical battle.

General Buford’s and his men’s diligent watchfulness on the morning of July 1st played a large part in the Union victory at Gettysburg. The Battle of Gettysburg was the largest battle ever fought in the Western Hemisphere and was a major turning point of the war which would eventually be won by the Union forces less than two years later. “Watchfulness” had much to do with saving the Union.

The Spiritual Parallel
General John Buford’s men knew for certain that they were on a battlefield and for the sake of their cause they knew they had to be watchful of the enemy’s coming attack. Yet how many believers start each day with the awareness that they are on a spiritual battlefield and therefore need to be watchful for spiritual attacks which are sure to come{Ephesians 6:12; 2 Timothy 2:3-4}. This lack of awareness sadly leads to many spiritual casualties that could have been avoided had believers been as watchful spiritually as General Buford and his soldiers had been on that fateful day in 1863 for the first indications of the approach of the enemy.

Believers have the mind of Christ{ 1 Cor 2:16}. But if we are not watchful we can yield our minds to the enemy.

If we allow the spiritual enemy to get control of our minds through worldly wisdom{James 3:14-16} and fleshly desires{1 John 2:16} we will live in spiritual defeat. His temptations will lead us into sin. The end result can be loss of joy, hope, and peace. The negative consequences can be physical, mental, emotional, or relational. Sin also damages our testimony and decreases influence for the Lord. The stakes are truly high.
Our Commander on the spiritual battlefield has given us, in spiritual principle, the same command John Buford gave his men that fateful night by telling them, “Look for dust clouds in the morning!” The Lord tells us to “Be watchful!” We are to look for spiritual dust clouds.

Consider these words found in 1 Peter 5:8-9{ESV}, “Be sober-minded; be watchful. Your adversary the devil prowls around like a roaring lion, seeking someone to devour. Resist him ,firm in your faith, knowing that the same kinds of suffering are being experienced by your brotherhood throughout the world.”

Note the enemy’s objective is to “devour.” The Greek word for “devour” can also be translated “drown”. “Drown” describes perfectly what our spiritual enemy tries to do to us through tempting us and deceiving us into sinning. He drowns us emotionally, mentally, and spiritually with the guilt and remorse that comes after we give into temptation and we sin.

The Lord, our commanding General, gives us the orders in His Word as to how we can keep from being devoured:

{1} “Be sober-minded” {1 Peter 5:8a}- This tells to be focused and serious about the reality of the spiritual battle.

{2} “Be watchful” {1 Peter 5:8b} – This tells us to be vigilant in watching for those early warning signs of the enemy’s approach.

It is important to note that to resist we must first be “Be sober-minded” and “watchful”. If we are not “sober-minded” and “watchful” for those spiritual dust clouds we won’t be able to resist because we will be taken by surprise. We will be overcome. If we are “overtaken in any trespass” {Galatians 6:1} it means we were not watchful and therefore ignored or missed the warning signals of a spiritual attack.

Nobody falls into serious sin overnight. One falls, in this way, after the ignoring of the dust clouds which indicate the approach of the enemy.

{1} You begin to notice feelings and thoughts of jealousy, envy, lust, anger, anxiety, and unforgiveness. .

{2} You receive an invitation to go to a place or to be with people which puts you in a compromising situation. Examples: you have or had a problem with drinking alcohol and are invited to a place where there will be much drinking and many opportunities to drink. Or perhaps you struggle with gossip and you are in a situation in which people begin to gossip. These are just a couple of examples.

{3} You are watching a movie and scenes start to be shown you know you should not be watching.

{4} You begin to notice that you are spending less time in prayer, reading God’s Word, sitting under the teaching of the Word of God, worshipping, or serving.

{5} You start to think about ways to deal with problems that are not scriptural.

“ Being sober-minded and watchful” {1 Peter 5:8} will enable you to prepare to depend on the Lord and in His strength to resist the oncoming enemy attack{James 4:7; Ephesians 6:10} . Following are ways we resist the enemy through an early response to “dust clouds”!

{2} Remove yourself from a place in which you are being tempted to participate in sinful behavior {ie gossip, drinking, lusting}.

{3} Make it a priority to get back to the place of prayer, reading the Word of God, worship, service, and obedience if you have strayed from these.

Pray for yourself and other believers to be more “watchful”. It is in being “watchful” on this battlefield that we can maintain “the high ground” and experience the victory Christ won for us on the Cross !

Dec
1
Tue
10:00 am Prayer Meeting
Prayer Meeting
Dec 1 @ 10:00 am – 11:00 am
We will be meeting inside of the children’s church!! Open to everyone!  Masks MUST be worn!
Dec
2
Wed
7:00 pm Mid-Week Service @ Church
Mid-Week Service @ Church
Dec 2 @ 7:00 pm – 8:15 pm
Currently studying the Book of Hosea!  Taking place both at the church and via Facebook Live!  If attending in person, masks MUST be worn!
Dec
6
Sun
10:00 am Sunday Service
Sunday Service
Dec 6 @ 10:00 am – 11:30 am
Both in person and streaming on our Facebook Live!  If you are attending in person service, please call the office with the amount of people in your group attending!  We will be practicing social distancing... Read More ›
12:00 pm Virtual Sunday School
Virtual Sunday School
Dec 6 @ 12:00 pm – 12:30 pm
Being held via Zoom! Children of all ages are welcome!  If you are interested in registering a child, please contact Abby Worl at abbywrl910@gmail.com for an invite link!  Virtual Sunday School consists of  a weekly... Read More ›
Dec
7
Mon
7:00 pm Men’s Bible Study
Men’s Bible Study
Dec 7 @ 7:00 pm – 8:30 pm
The men will be going through the book “Christian Beliefs” by Wayne Grudem.  They will be meeting at the church in the CRY ROOM.  The book cost is $10.  Masks must be worn!
View Calendar